OK.  Three guesses.  What season are we in now? 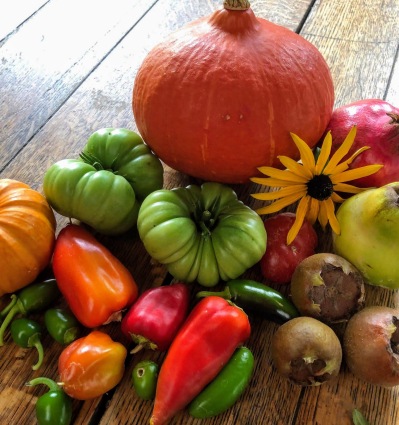 Almost as nice as….. 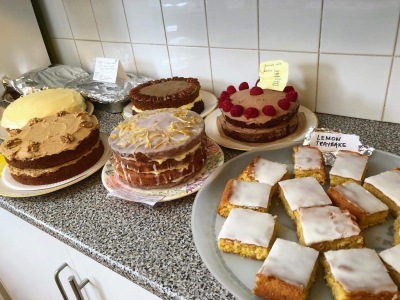 But we’re getting ahead of ourselves

Plants and their names

All plants belong to a family, and the plants within that family have certain things in common.  However, they might not be immediately obvious to the naked eye!  For example, the Rose family (Rosaceae) is comprised not only of Roses, but also of Cotoneaster, Prunus, Alchemilla, Sorbus and Rubus, to name but a few.  As a rule, the flowers in this family all have five sepals and five petals.

The largest family among flowering plants is that of the Asteraceae.  Other families  include Ranunculaceae, Papaveraceae and Solanaceae.  Check ’em out!

This is such an important issue in horticulture and something we revisit every year at Friday Group.  The reason plants have Latin names (as well as common ones) is not to scare or intimidate gardeners, but so they can be specifically and universally identified.  Latin is an unchanging language and by using the system of ‘binomial nomenclature’ (a way of naming all living things), devised by Carl Linnaeus in the 18th century, we can specify exactly which organism we are concerned with.  Common plant names can vary from place to place and country to country, but the Latin name of a plant means that it can be uniquely identified anywhere in the world.

For example, a rose could be any number of colours, shapes, types.  However, Rosa moyesii ‘Geranium’ is this particular rose – 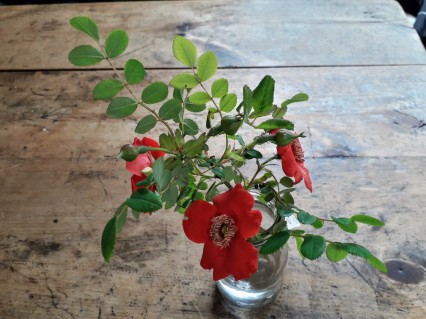 This is a wild rose cultivar, as should be apparent from the leaves.  A tall shrub rose with orange-red single flowers and pronounced anthers.  Come the autumn, it produces the most fabulous flagon-shaped hips – provided it hasn’t been dead-headed by an overly-enthusiastic gardener.

Written on the label below is the name of a maple tree.  The first word gives the plant’s genus (a bit like a surname) and the second gives the species.  The species name tells us something about the plant – perhaps its colour/form, where it is from or maybe the person the plant is named after.  Here we can see that this maple tree (Acer) has leaves shaped like the palm of a hand (palmatum).  And we know that it is different from other types of maple tree.

The genus name is written starting with a capital letter, but the whole of the species name is written in lower case.  Other examples of the two-name system are: Helleborus orientalis; Campanula pyramidalis; Lavendula dentata.

When plant breeders develop new plants, often a third name is added, which shows that the plant has been bred by someone and given a name.  This cultivar (or variety) name, is written with a capital letter and is in single quotation marks.  For example: Betula utilis ‘Jacquemontii’ and Acer palmatum ‘Bloodgood’.

At Garden House we place labels in the 12.00 o’clock position, at the back of pots or trays.  When sowing seeds or planting seedlings, we also date the label at the top.

This week, Bridge talked about tender perennials – and below are examples of these.  (N.B. Note the labels which accompany them.)

Tender perennials are plants which have lifecycles of over two years PROVIDED they are kept frost-free over the winter months!  They can be kept in a heated greenhouse or indoors in a light and airy place, and can only go out into the garden again when all danger of frost has passed – usually around May (although this can vary from location to location).

One way of ensuring tender perennial plants will survive is to take plenty of cuttings.

The Chinese rice-paper plant is a tender perennial, and one of the best-looking exotics.    It has massive palm-shaped leaves; Architectural Plants describes it as a Fatsia japonica on steroids. 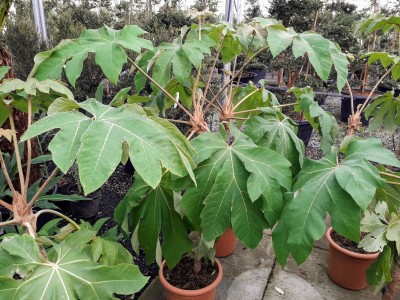 Salvias are part of the Lamiaceae family, members of which have lipped flowers and square stems – like Mint, Thyme, Phlomis and Lamiums. 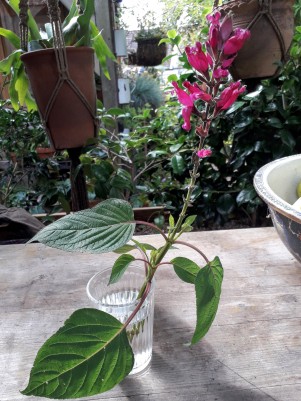 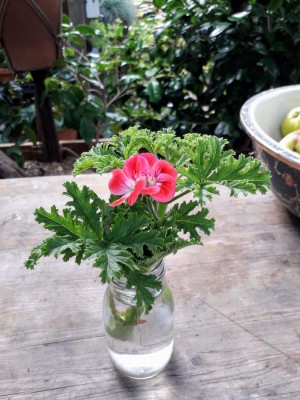 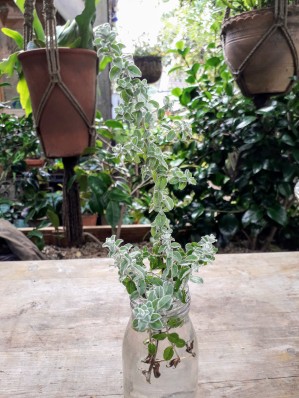 The (species) word microphyllum tells us that this plant has very small leaves. 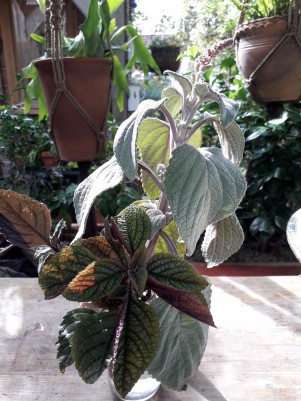 Plectranthus argentatus (the species word argentatus, means silver) is on the right, whilst on the left is Plectranthus ciliatus (careful how you pronounce it).

Jobs for the week: 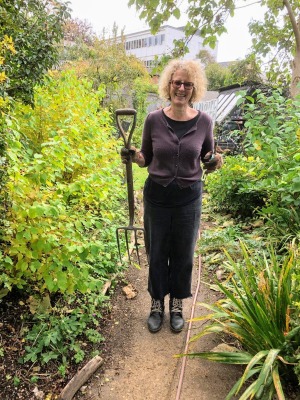 The Cornelian cherry needs its canopy raising – or, if you’re not terribly PC, its skirts need lifting.  Prune back the Philadelphus too. 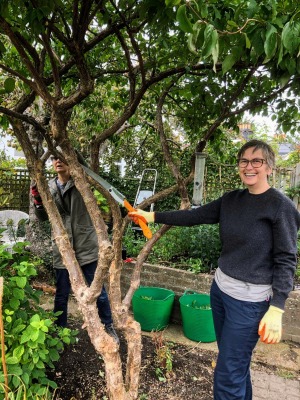 It’s growing on one of the arches – and has got very “hairy”.  Cut back leggy stems to two buds.

Short back and sides?

Meticulous clearing up going on here

Cut remaining flowers and remove some plants.  Dig over the bed, add compost, then set out Wallflowers so they can start to get their roots down.  Later, these will be moved to their intended flowering positions. 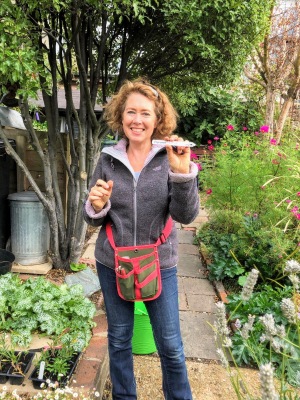 Here’s one I prepared earlier

And the genus name?  Erysimum, of course!

Pot on Pelargonium cuttings in the upper greenhouse

And plant up an old pair of boots with Sempervivums.  Well, why not?

Hope you used the right boots?

And take out all dead, damaged and diseased material. 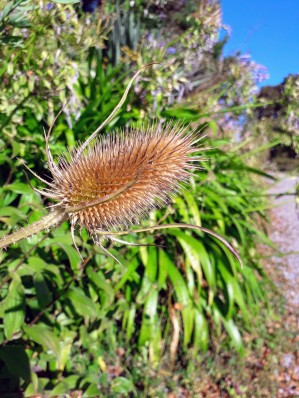 Cut flowers to fill jugs in the Garden Room 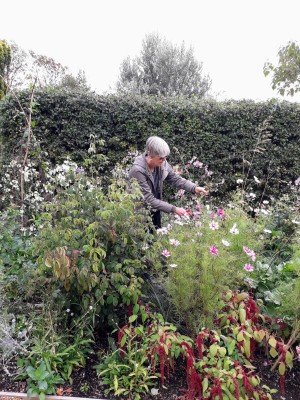 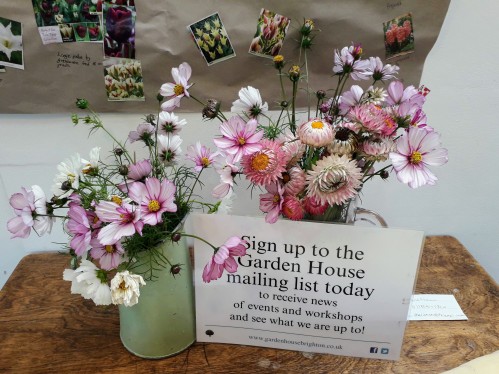 As we worked, the Macmillan Coffee Morning was taking place, and we welcomed visitors in to enjoy the garden, coffee and cake.  Recipe books were on sale too.

It’s essential to check for quality…

Just a small piece, to see if it’s as delicious as it looks

someone’s been very thorough with their checking

Summer may have gone, but there are upsides to autumn