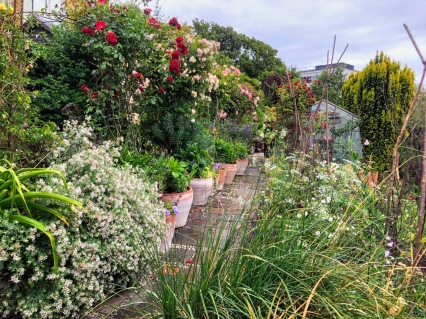 19th June. And everything’s coming up roses at Garden House….but roses need water….and where’s the rain? How appropriate that this week we Zoomed off to another Friday Group member’s garden in Hove, and were asked to think about the collection, storage and use of water. We’re real Eco-warriors, us Friday Group People

The virtual garden tour was excellent – and challenged us to think about water consumption, especially since April’s weather has morphed into May’s and May’s has become June’s. The garden owner uses mulch and compost extensively to prevent  soil erosion and water evaporation. Planting the right plant in the right place is essential to ensure that it thrives and copes with a minimal amount of watering. Melianthus major, Daucus carota, Alchemilla mollis, Opium poppies, Alliums and Lychnis were particularly striking. A well-managed pond brings in wildlife and much of the ‘planting’ simply arrived unasked. Parts of the lawn are left unmown to encourage wild flowers. The shady end of the garden boasts an Echium forest, prompting numerous requests for seeds.

Essential to mulch and/or Strulch. Use ring culture pots to grow, for example, tomatoes. Ensure there are plenty of water butts around the garden. One website recommended for its huge range of products is http://www.waterbuttsdirect.co.uk Other butt websites are available, but be careful what you google. Use guttering on sheds and greenhouses to trap/divert rainwater. Investigate the potential use of ‘grey’ water. Use ‘leaky hoses’ around the garden. Think about using permeable surfaces as paths/driveways. Water early in the morning or late at night; water the soil, not the plant. Establish moisture retaining planting holes – should be able to water thoroughly once and then leave the plant to manage. Leave lawns to cope – they will generally recuperate after periods of drought. Investigate Hozelock tanks. Use upside-down water bottles, with a tiny hole in the cap, to water the roots of tomatoes and veg.

Some rather more ‘out there’ ideas: dig a well. Ding dong. And learn how to dowse.

Six favourites from the owner’s garden – who also supplied the photos.

This highly structural biennial is not yet in flower, but the flower spike can be seen emerging at the rear of the plant. This cultivar of Sea Holly is named for the 19th century gardener Ellen Willmott, who, apparently, secretly scattered seeds of the plant when visiting gardens. The green stems and foliage turn silver-grey as they mature and contrast with metallic blue flowers. A self-seeder – seems appropriate!

The Globe Thistle’s tell-tale spiky leaves are in evidence here – shortly to be followed by its metallic blue flowers. Great in a dry, sunny border and will cope with most soil types. A magnet for insects. Can be divided in spring or autumn.

The excitement of an Allium head emerging! The purple/red flower is slightly elongated and has a punk haircut vibe going on. Very attractive and great in flower arrangements too. Note to self: plant more Allium bulbs.

Best to quote directly from the catalogue for Architectural Plants: ‘Grow this and die happy’. A Tree Echium from the island of La Palma, it’s an astoundingly dramatic biennial which forms a low growing rosette of silvery leaves in year one and, in year two, sends up a mahoosive silvery-grey spike, covered in little blue flowers, after which it sets seed and dies. Bees love it. Will self sow in mild areas, or collect the seed to start it off again. ‘Another example of screaming exotica.‘

Hostas, or Plantain Lilies, are clump-forming herbaceous perennials, and this is one of the most attractive variegated forms. The vivid green, ovate leaves have an irregular creamy-white edge, which light up shady areas in the garden. Spikes of blue/mauve flowers emerge in summer. Easy to grow, it likes shade and moist, well-drained soil and needs to be watered fervently, fervidly and frequently – especially in the first year after planting. It loves being fussed over, fed and mulched. Sounds like great-aunt Agatha.

Jobs for the week 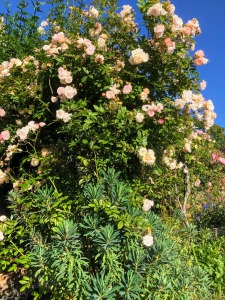 Dead-heading takes, and I quote, “frigging ages”. But it’s worth it. They’ll look good, smell good, and, by golly, they’ll do you good. Feed and water them too.
Tie-in tomato plants as they grow
Also applies to cucumbers, if needed. Feed and water. Natch.
Remove Broad Bean plants from your potager

Only after you have harvested their benison, of course. Enjoy! Then plant leeks. After all, the show must go on. And it does in this G/House bed measuring only 1 m x 2.5 m, containing Tomatoes, Courgettes, Broad Beans, Sweetcorn, Mizuna, Lettuce, Nasturtiums and Calendula.
Continue to sow biennials
Sea Stock, Digitalis, Lunaria, Sweet Rocket, Erysimum, Dianthus barbatus ‘Sooty’ and other Sweet Williams.
Continue to sow herbs and lettuce seed
Water and feed 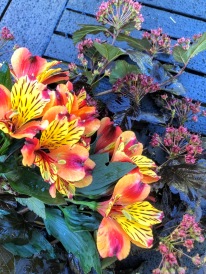 Still time to sow annuals
Cosmos, Nicotiana, Rudbeckias and Zinnias. Harden off well before planting out. ‘Growing Success’ slug pellets have lived up to their name. Better than tears.
Don’t stop weeding!
Keep at it, possums